My favorite flappers in various states of undress #1: Side Parting Girl

I think of her as Side Parting Girl. What I like is that she's not particularly pretty; very much the girl next door.

I like it that we have pictures of her in various states of dress and undress.

Was she somebody's girlfriend?

Or did she work in the shop downstairs?

I suspect when she's older, she'll be beautiful. There's character in there, and another ten years will give her an angular  face.

Of course it's the stockings that do it for me! That's one of the reasons I collect images of this particular flapper. More behind the cut...


Here's a sequence (starting left) which must be very tame for the time, but which push all my buttons.

I know it's silly, but I like the clunky inelegance of the thick garter straps.

I suspect  they are more comfortable than the modern stringy kind.

Also they are a reminder that stockings are just practical wear - pre WWII almost every woman you see is wearing stockings under her dress or skirt!

Of course, my fantasies are submissive. When I see a be-stockinged flapper, I want to be her slave, doing pretty much what this maid is doing in the next sequence (starting right), though actually dressing as a maid isn't my bag.

Imagine being so close to those stocking tops, and knowing what was between her thighs, perhaps even catching a whiff of her musk?

But there she is, girl next door with stockings beneath the skirt.

I want her to be a "nice girl" who modeled for kicks and extra cash. Perhaps this was her secret adventure.

Equally, she could have been a hooker.

Two pictures give us a harder edge.

We don't know whether she was posing, or whether this was later in her career, or what.

I don't like her as much like this. However, with a whip in her hand, she would be perfect!

Whatever the truth, there are enough pictures of this flapper semi-clothed to make the nude ones feel like a naughty treat rather than business as usual.

Here's some nude pictures of her:


She doesn't quite look comfortable just posing. However it all depends on the camera and the lighting. Perched on a plinth, I'm sure she was physically uncomfortable, possibly cold - look at her nipples.

She does much better when doing something.

Her doing her nails nude feeds my slave fantasy. I imagine being in the room, waiting, watching... desiring, not being able to touch.

She's probably trimmed, usually poses with her thighs pressed together... but not always.
However, here's a nice one of her showing off a womanly bush: 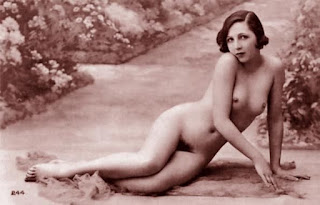 Finally, there's one picture where we see everything... assuming it's her. I think that's her in the middle.
I don't know about you, but I know exactly what I'd want to do if I could step into that picture; and the first thing would be to fall to my knees....

But that's my fetish. Yours is probably different. However, if you read this far then I guess we both share a taste of flappers in various states of undress.
EDIT: Strong possibility this is Lucette Desmoulins.