Somebody just bought the Chastity Belt!

It's an old one - my first! - but I still have a soft spot for it. It's the first time I really articulated my sexual orientation, and it's all in there.

So, free of Amazon's consent theatre requirement, I finally got Chastity Planet working properly: "In space nobody can hear your safeword..."

Here, we find our hero prostituting himself in an alley:


The girl groaned louder, louder still, then let out a long sigh and — abruptly - stood up off the wall.
Robin sank back to sit on his ankles. Her juices dribbled down his chin. His penis throbbed uselessly between his legs but she was beautiful like a big cat, sated, and even in the half light he could see her face was delightfully flushed from his efforts. He grinned up at her.
Without a word, she dropped something in front of his knees. She pointed her finger, turned the ring — triggering a weird squirming sensation in Robin’s groin —  then stepped around him and vanished into the street.
He stared down at what she had dropped: a ten credit bill. Not only had she used him, she had turned him into a prostitute.
Numbly, he picked up the note, stuffed it in his pocket then rose.
It was then he noticed the weird cold sensation in the tip of his dick.
He backed further into the alley, glanced around, then slid his hand down the front of his shorts.
Sure enough, the front of his chastity cup had opened… only it hadn’t done so enough to let his cock out. Instead, there was a tiny slot that let him get a finger to the tip of his captive penis. So much for visions of pumping away at his dick! This was as much as the device would ever open.
The tip was slippery with semen.
He licked his lips to capture more of the girl’s taste, braced himself against the alley wall, and started to rub.
The sensation was intense enough to make him whimper. His legs quivered, his breathing quickened. “So close…” he whimpered. “So… close…”
The slot abruptly closed, squeezing out his finger.
He slumped against the wall and wept. But if he had come, here in this dusty ally, he’d have soiled his shorts with semen. The girl was right; he was a loser.
He wiped his mouth on his arm and — the stranger’s taste still clinging to his mouth — stepped back into the street.

Chastity Planet Uncut! Available for preorder! Get the sample!

At last, my revamped Chastity Planet epic is up on Smashwords. Click here to get the sample!

It's a darker revamp of the original  series, with some heavy editing, less consent theatre, more dark and explicit content (including a brutal public flogging!). I am so glad I left Amazon!


"In space, nobody can hear your safe word!"Imagine taking a wild spring break with your sexy coed pals... except it's on a SciFi pleasure world where all the men are trapped in semi-permanent chastity and if you earn too many demerits you end up being publicly flogged. Could you survived reverse oral gangbangs, licking booths, rampaging sex maniacs... and not end up as a chaste slave? 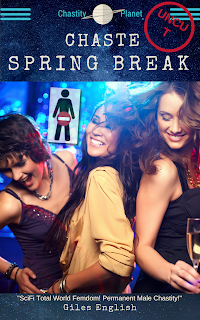