So, free of Amazon's consent theatre requirement, I finally got Chastity Planet working properly: "In space nobody can hear your safeword..."

Here, we find our hero prostituting himself in an alley:


The girl groaned louder, louder still, then let out a long sigh and — abruptly - stood up off the wall.
Robin sank back to sit on his ankles. Her juices dribbled down his chin. His penis throbbed uselessly between his legs but she was beautiful like a big cat, sated, and even in the half light he could see her face was delightfully flushed from his efforts. He grinned up at her.
Without a word, she dropped something in front of his knees. She pointed her finger, turned the ring — triggering a weird squirming sensation in Robin’s groin —  then stepped around him and vanished into the street.
He stared down at what she had dropped: a ten credit bill. Not only had she used him, she had turned him into a prostitute.
Numbly, he picked up the note, stuffed it in his pocket then rose.
It was then he noticed the weird cold sensation in the tip of his dick.
He backed further into the alley, glanced around, then slid his hand down the front of his shorts.
Sure enough, the front of his chastity cup had opened… only it hadn’t done so enough to let his cock out. Instead, there was a tiny slot that let him get a finger to the tip of his captive penis. So much for visions of pumping away at his dick! This was as much as the device would ever open.
The tip was slippery with semen.
He licked his lips to capture more of the girl’s taste, braced himself against the alley wall, and started to rub.
The sensation was intense enough to make him whimper. His legs quivered, his breathing quickened. “So close…” he whimpered. “So… close…”
The slot abruptly closed, squeezing out his finger.
He slumped against the wall and wept. But if he had come, here in this dusty ally, he’d have soiled his shorts with semen. The girl was right; he was a loser.
He wiped his mouth on his arm and — the stranger’s taste still clinging to his mouth — stepped back into the street.

I also wanted to make it proper Science Fiction... enough that I and readers could suspend disbelief.

So I decided that - in the far future - inscrutable Aliens have set up the Adult Zone, a buffer between themselves and Humanity. Humans settlers are welcome as they don't breed, but all worlds have experimental constitutions and limited technology - no bots - thus emulating pre-space conditions, especially a labour economy.

In this future, humans can repeatedly rejuvenate in late middle age, so aren't worried about squandering precious years, or missing family. They also have stasis implants preventing severe injury or death. So there are few downsides to entering the Adult Zone, other than what you'll find there...

Named for Artemis, the ancient virgin huntress goddess, Artemisia is a planet on which all men are chaste second class citizens or worse. At minimum, the following applies:
As a baseline, this changes the dynamic between men and women! 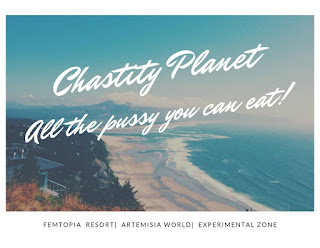 Men are the sexually vulnerable ones, sometimes afraid of being turned on, often subject to stereotyping - "He's ditzy because he's sexually frustrated" - and routinely exploited; a good situation for a man-whore with strong submissive tendencies! 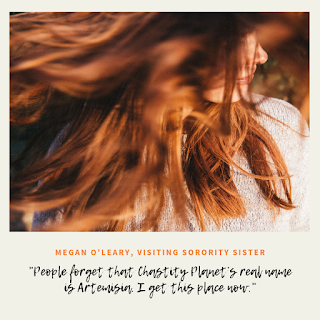 OMG, this sounds amazing! I cannot wait to read it. I'll be sure to get it reviewed and spread the word. :)

Glad you like the idea! I hope you've downloaded the sample.