Ten tips for a chaste night of passion... 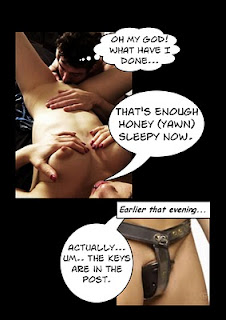 Of course, there's the masochistic thrill of the moment of lock-in, and every time I'm horribly turned on and realise that – yes, really – I won't be able to come tonight.

It's also nice to relax into the role knowing that there'll be no awkward anticlimax at the end of the evening, and that there's no vanilla pressure on either of you to unlock.

Most of all, though, it's a way of fully entering the chayste existence. If your chastity fantasies are about being chaste, rather than the keyholder power relationship, then their most natural expression is to be locked in with no immediate prospect of release.

Unfortunately, there are usually two snags: fitting the adventure into your mostly vanilla relationship; and overcoming the practical problems of sleeping in a chastity device.

Sure, they'll often have fun indulging our kinks because they like being sex goddesses, because being transgressive gives them a kick, or – best of all – because our kinks offer a natural expression for their vanilla sexuality. For example, if she enjoys flirting and sexual teasing, then a man in a chastity belt makes a great target. If she likes being pampered, then a slave or submissive lover could make her evening.

For these reasons, it's often quite easy to get a girlfriend or partner to play kinky games—but only up to a point. Games that are more trouble than they're worth, or violate her sense of self, or that threaten some unwanted relationship transformation, turn her off and make her look at you with suspicion.

So, unless you're with a true fetishist, if you want to spend the night in chastity, you have to approach your playmate sensitively and realistically....

Above all else, be realistic!

If you remember that it takes more than a sex toy to change the way our bodies and our minds operate, then there's a good chance that even a very vanilla partner will enjoy her part in your fantasy...

Very well said! Too often the practical logistics are dismissed in favor of the fantasy; understandable, of course, but your tips will serve folks well.

Do you have anything you could add? I suppose I've drifted into trying to create a practical resource for people like me/us...