"Sing if you're glad to be chayste" 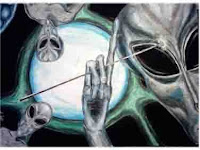 This new story idea has got its hooks into me: a world where orgone-harvesting aliens have arbitrarily chastised 5% of the males between 18 and 40, turning them into chaystes.

Should there be a downside to getting turned on? Perhaps the aliens only have so many channels. So if you can just avoid sexual excitement for a few years, perhaps the thing drops off and they abduct some other sucker. This would make older chaystes somewhat suspect in the public eye. Or is it better to have "chayste" as an irrevocable identity that you just have to learn to live with?

Should people be able to tell that you're chayste?

If you can keep your chaysteness secret, then that gives us "coming out" stories, and scenes where she comes on to him, and he's trying to hide the fact he has no accessible genitals...

On the other hand, if the aliens collar their orgone donars, then that will mark them out as sexual targets for predatory young women, but also as safe playmates for intriguingly inhibited ones--

--realistically it's probably what the 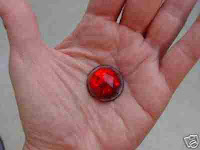 aliens would do, assuming they have any knowledge of humans.

What would they use? A collar or forehead crystal would be too easy to hide. How about a palm crystal, like in Logan's Run? Alien booby traps would prevent the obvious surgical solution. It would certainly be hard to hide from anybody you knew, but you could hide it most of the time in public spaces.

Perhaps it glows redder, the less orgone you produce. So, if you live the life of an ascetic hermit, it'll shine like a beacon, beckoning all the predatory females...

Email ThisBlogThis!Share to TwitterShare to FacebookShare to Pinterest
Labels: The New 3rd Sex

What if the device didn't just become a semi-permanent appliance, but integrated with the biology of its "host." A symbiotic relationship gives lots of creative freedom.

If the device itself lives off its host, and thrives off its excitedness, then it would obviously take steps to "enhance" its host. Affecting the hormones of the host, increasing testosterone. Not only are these poor guys locked up, now they're hornyer than ever and beefed up pumping off all kinds of pherimones.

It certainly makes a great fantasy - being chaste and out of control. Could take it further and have the device trim unwanted body fat and basically turn the victim into a sex god.

I'm not sure that works for a story, though. We want to see the hero's mental makeup draw him into the chayste lifestyle against his will. Remove that will, and the story doesn't work.

I had wondered, though, whether the device would have a permanently erect prosthetic - that in itself would be very hard to hide. The only snag is that it destroys that intriguing neuter look.