Finding her Dark Side 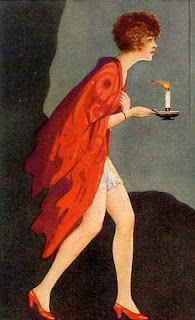 Most girls don't wake up at [the age of consent where you are], and say, "Gosh! I want to dominate a man."

Young women in general are just not wired to be quite as geeky over sex as men, and those with high sex drives tend to spend their time having sex with cool older guys, rather than thinking about it – it really isn't fair, is it?

Proceed with caution. The darkside is a nasty, evil place were we enjoy immoral solutions to the problems of being an adult and having adult relationships. Most people are ashamed or afraid of what's there.

There's also a moral issue. Don't do a bait and switch, don't form a vanilla relationship because you are enticed only by her darkside, or because her fucked up lightside resembles the darkside you are looking for.

But, I'll talk more about all this in another post. Right now let's think about mapping her darkside.

GLIMPSES INTO THE DARKNESS 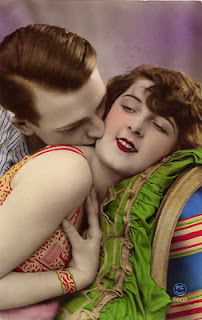 Think of your partner's darkside as a parallel world where the rules are set up to have the kind of relationship that works around her issues. Since you're only interested in identifying her preferred darkside relationship, you don't need to turn yourself into her shrink – which would probably be unethical or damaging anyway. Instead, look for ways in which she'd like to take a "break", or make a "breakout".

What to look for: Break or Breakout?

It's a stereotype, but it is probably true that if in the light of day she is controlling and bossy, there's a good chance she yearns get what she wants without having to ask for it in detail. Similarly, a flirt who is always seeking male approval might yearn to switch off her charms. In their darkside, each of them gets to take a "break".

On the other hand, perhaps the bossyboots really wishes she could be in charge without all this crap about people's feelings. And, suppose the flirt enjoys flirting more than fucking. The darkside enables both to stage a "breakout", busting through normal morality.

You can usually tell the difference between the two by looking for the pain. If some aspect of her personality seems driven, or doesn't really make her happy, then she might want a break from it. On the other hand, if she gets frustrated when her instincts and personality collide with the real world, then you might be looking at a breakout.

Adults usually manage to get by in the world and in relationships. By the time we're in our 20s, if not before, we accept other people are real, and that dealing with their personalities, expectations and demands is part of being human.

However, there are times she'll revert to her earlier self, or wander into the darkside:

So, when you think you've caught her taking a break, or breaking out, work out what rule this might imply. Later, weave it into a fantasy or a bedroom sex game, note her reaction and modify accordingly. (If you're not sharing fantasies, then it's time to start.)

Sometimes the rules and the darkside relationship seem to arrive at one go. For example, if she makes you wear speedos in bed, it's tempting to think that it's time to invest in a chastity belt. However, to deduce her darkside relationship, you have to look at what kind of relationship it creates. Perhaps it's as simple as; she likes to control the sex. "He wears a chastity belt" might be a good rule. But, "She's in charge" would do equally well.

Since the rules shape her preferred darkside relationship, then it is the relationship you need to map. This depends on her intimacy stances.

She's very comfortable with mutuality, but sometimes you catch her getting it on her terms. Perhaps she secretly likes to take charge of her friendships, or likes to control her relationships. Or maybe she likes sex on her terms. Does she like to make you earn access to her body? Pay for pleasure with amusing discomfort? Tease you until you squirm? Or are penises not allowed?

ED: "Stop fussing and let me get on with it."

She's one of those people who wishes friends and lovers would stop trying to second guess her feelings. "What do you want from me? I'm here, aren't I?" In bed, she might be quite the technician – she probably gives a great hand job – but she sometimes forgets to tell you whether she's come or not, and likes to take responsibility for her own orgasm.

DE: "I don't care what you feel – you should know what I'm feeling."

Deep down, she wants to trundle through life while people fuss around her. In bed, she sometimes likes to lie back and let you please her as best you can. Afterwards she'll smile benignly while you come to orgasm, though do nothing much to help.

People usually have additional stances. Usually these complete a column or row. For example, if she's DE & DD, then anything goes as long as she doesn't have to engage with your feelings.

Sometimes – just to make things confusing - she's avoiding a particular square. For example, ED & DE & DD, is really best written NOT EE – she'll do anything to avoid the awkward business of mutuality.

And then, there are probably women who enjoy wandering through all the intimacy stances, while maintaining one or more rules, e.g. she's in charge, or you're in a chastity belt.

The idea is to evolve an authentic shadow relationship through cycles of fantasy and experimentation. But that belongs to another blog entry....

I'm sorry it took me so long to comment but my time and internet have been sporadic over the past month or so.

I have been thinking for a long time just how to respond to a few of your posts (especially the one before this one) but I'm really not sure how to go about it.

I do think that many pre-negotiated D/s relationships end up in the "only one fully willing participant" scenario since men are usually the ones forced to compromise the most in these situations and they are likely to be placed in situations that stray far from their primary fetish fantasies.

However, if both individuals have a nearly perfect fetish overlap, there are situations that can steer clear of said conflicts, unless the nature of those conflicts is also part of the overlap, e.g. a man who has a fetish for her withholding pleasurable situations from him. I can also foresee situations that will behave the same simply by having an extremely strict Mistress.

In terms of this post in particular, it's a bit of a strange one. Women are generally more likely to be honest with themselves about their own sexual desires (which is why they are less likely to develop "fetishes" in their most scientific definition). They are also often more willing to explore and initiate "kinky" sexual content. It does strike me as odd that even with this in mind there are so few Dominant Women out there but at the same time, I think that upbringing and societal norms have a bit to do with that. There's tons of women who are aggressive tops in the bedroom, but very few that classify themselves as Dommes.

Going back to the other themes of these posts... a wild card comes to mind when it comes to D/s relationships. That wild card is "true love." True love describes situations where a party is a willing participant in activities they do not enjoy simply out of love for the other (this could be performed by either role). These situations can often steer clear of the conflicts you described.

In regards to my own experiences I have been in 4 D/s relationships, 3 of which were pre-negotiated and the fourth was instigated by the Domme after beginning as a vanilla relationship. Each was a bit different, the first really flowing along with true love and non-fetish personality conflicts leading to its breakdown. One simply failed to connect deeply on both a fetish and personal level. One connected nearly perfectly on a fetish level but failed on a personal level. My current relationship has a partial overlap in fetishes and several personality conflicts. Overall our true conflicts rarely arose from lack of overlap in the fetish department but those relationships also weren't bound by marriage, legal bondage, etc.

Sorry if this seems scattered and all over the place...

Let me know if you have any questions and I can try to elaborate more later.

Thanks! Just posted a response in the main blog...