The law of ten 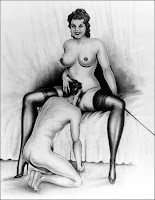 If you can find her, you’re competing with between one and three other guys, and one of them’s probably her boyfriend. 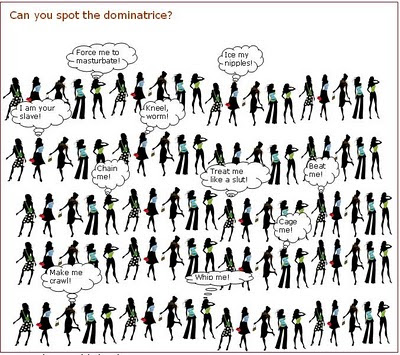 Email ThisBlogThis!Share to TwitterShare to FacebookShare to Pinterest
Labels: getting a vanilla partner to do kink

While the internet tends to bias things a bit towards the male populace your overall point is something I agree with completely.

The odds are quite poor for men.

The downside is that if you pursue openly BDSM-kinky dominant women you have better be able to find a way to separate yourself from the pack as the odds are even worse.

As a dominant woman, having the huge numbers of male "subs" to pick from isn't necessarily a good thing. While there are probably many men out there that have a truly submissive mindset, there are far too many who are only looking for a mistress in order to have their own needs met. This is fine and all, but most dommes (myself included) would rather have a man that is eager to please than one that is eager to be pleased.

That is very true, RogueRin. I've known several Dommes that have felt similarly. I'm sure it's fairly easy to get discouraged.

I guess the way that I've looked at courting Dommes (and vanilla dating as well) is that it's like women are holding a sieve and men are like grains of sand. The grains get dumped in and only the ones that really stand out stay in the sieve while the others fall through.

I know that filtering process can probably feel tedious over time. It's one thing when you've strained a small sandbox but another thing when you've gone through an entire beach's worth of sand and had very few make the grade.

I've always given my women friends (both vanilla and Domme) the advice to actively seek out men rather than wait holding the sieve. Searching for the keeper among the "eye catchers" is often an easier task but I still consider this to be the role of greater power. Too often I've felt like the grain of sand.

I know one of the biggest compliments as a sub that I've ever received was when a well-known local Domme wrote to me about an ad I had placed on collarme stating that I had the right mindset to be her houseboy. Alas, I hadn't logged into that account in months and hadn't removed the "seeking Dominant" label on my profile and she was quite angry with me when I told her I had found someone.