The Ultimate Chastity Belt (What the Victorians did for us) 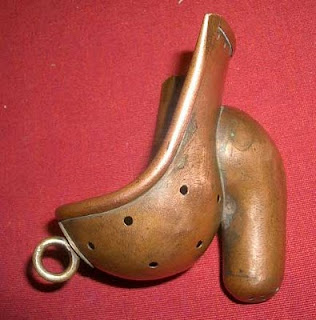 You see the metal parts knocking around museums and of course online (left).

Now the Victorians were great engineers, and not consciously satisfying a fetish. They were designing something for nightly wear, or even 24/7. Even though the wearers hardly consented to the things, they were onanistic youths and lunatics, rather than prisoners.

So the nutjobs forcing the guys into chastity were actually doing it For Their Own Good, and were probably keen to minimize discomfort and avoid health problems... 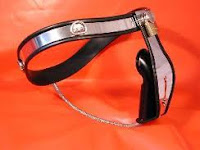 This means that what we didn't get was something based on the a supposedly Medieval original (Neosteel example, right).

Sure, they look good, but they require tinkering before they feel great, and most wearers will tell you that you have to adapt to the belt, not the other way around.

The problem is the rigidity. 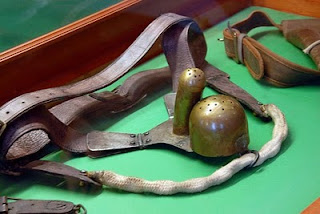 Similarly, you can't put this on a sallow youth because he's still growing, or at least filling out. And, presumably, you're expecting him to do healthy activities like physical jerks.

No, not being overt chastity fetishists, the Victorian engineers started off with the idea of preventing access to the genitals, and worked their way out. What they ended up with was lockable underwear like this example from a museum in Prague (left.)

All the design problems have been solved for us (see also the design, right). 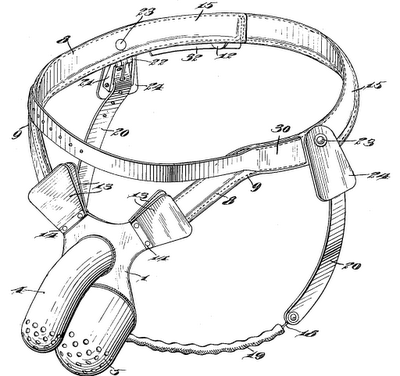 The genital shell accommodates the testicles with no chance of using the scrotum to pull out. The buttock chains are adjustable - the hanging straps are adjusted behind shields which become inaccessible when the belt is tightened. The chain is fabric covered to prevent pinching and chafing.

Finally, the girdle itself is adjustable and will bend to fit with the wearer.

--because most of the parts are made of leather!

OK, I don't know whether it's shower proof, but a modern equivalent could easily be made so.

The genital shell rather flaunts the penis - but a cup design would fix that.

The aesthetics are very Steam Punk - perhaps too much so for most fetishists, but it could be done in other colors with modern materials... I've knocked up something myself using polypropylene webbing which does very nicely indeed, and dries quickly after a shower. 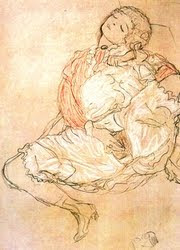 Think about it - no modern materials are indestructible. Anything you're going to get a belt made out of will by definition be something that workshop tools can cut. So - fetish aside - why go for more security than "requires tools and conscious effort, and requires breaking the device".