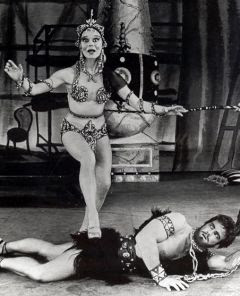 However, I don't think its quite as bad as it could be. Our darksides reflect aspects of our light side personalities – there's this thing called Shop Window theory – so if you are really emotionally compatible with somebody, then there's a good chance of a lot of overlap. Hence my idea of the "Shadow Relationship".

I do think that many pre-negotiated D/s relationships end up in the "only one fully willing participant" scenario since men are usually the ones forced to compromise the most in these situations and they are likely to be placed in situations that stray far from their primary fetish fantasies.

Yes. Or at least a man's fantasies are likely to be more diverse than he can find reflected in any one woman. Also, a particular fetish may be a turn-off for the partner, even though the dynamic behind it is not an issue, e.g. she may be very happy to punish him, but not by forcing him to crossdress.

However, if both individuals have a nearly perfect fetish overlap, there are situations that can steer clear of said conflicts, unless the nature of those conflicts is also part of the overlap, e.g. a man who has a fetish for her withholding pleasurable situations from him. I can also foresee situations that will behave the same simply by having an extremely strict Mistress.

A very useful point! Some fetishes can be a by-product of lots of different types of relationship. If it's the "witholding" you enjoy, you can get that from almost any of the intimacy dynamics: EE & ED - she enjoys your frustration, DE & DD – she is completely indifferent to your frustration.

....Women are generally more likely to be honest with themselves about their own sexual desires (which is why they are less likely to develop "fetishes" in their most scientific definition). They are also often more willing to explore and initiate "kinky" sexual content. It does strike me as odd that even with this in mind there are so few Dominant Women out there but at the same time, I think that upbringing and societal norms have a bit to do with that. There's tons of women who are aggressive tops in the bedroom, but very few that classify themselves as Dommes.

I think your last sentence hits at the answer; sexually active women can do pretty much what they want. If they enjoy tease and denial, then they become appalling flirts. If they enjoy topping in the bedroom, they just take control of the drooling and grateful male. If they want to lie back and be served, they don't even have to ask. The experimentation fits into this context.

Going back to the other themes of these posts... a wild card comes to mind when it comes to D/s relationships. That wild card is "true love." True love describes situations where a party is a willing participant in activities they do not enjoy simply out of love for the other (this could be performed by either role). These situations can often steer clear of the conflicts you described.

I would theorise that "true love" always involves a lot of overlap in the darkside. There are still hazards if she is less familiar with the fetish world than he is. Also, both parties tend to be willing to play slightly more scripted roles – nothing wrong with that, it's just that I'm talking about how to establish spontaneous play.

I can't pretend to speak with any direct knowledge of the fetish scene. I suspect that my intimacy map still applies, but that the waters are muddied by an extra layer of negotiation and tradeoffs.

In regards to my own experiences I have been in 4 D/s relationships, 3 of which were pre-negotiated and the fourth was instigated by the Domme after beginning as a vanilla relationship. Each was a bit different, the first really flowing along with true love and non-fetish personality conflicts leading to its breakdown. One simply failed to connect deeply on both a fetish and personal level. One connected nearly perfectly on a fetish level but failed on a personal level. My current relationship has a partial overlap in fetishes and several personality conflicts. Overall our true conflicts rarely arose from lack of overlap in the fetish department but those relationships also weren't bound by marriage, legal bondage, etc.

Thanks for sharing this. These all seem to fit the pattern...

Thank you very much for the reply. I think I realized the difficulty for me in writing a fully coherent set of comments was that I didn't really have an overall point but I did want to give you feedback and have some comments.

D/s relationships are very diverse in their styles and your breakdown definitely describes the bulk of what's out there (or at least what I have been exposed to).

I'm usually fairly good at taking a step back and seeing my own situation but for some reason it's difficult for me when it comes to D/s. This is probably because it is to strongly tied to my sexuality and when aroused my IQ cuts in half :P

Engaged/Disengaged can be applied to pretty much all relationships if you break down the interaction for everything (including non-fetish/kink examples). I think a lot of the styles of conflicts that surface in a D/s relationship can often be determined by how the Domme reacts to conflict. I have been with Dommes that kick the Dominance into high gear when challenged and I've known others that when faced with similar challenges tend to regress emotionally and start throwing temper tantrums with no D/s feel to them at all.

It's interesting in a lot of ways to look at how people change over time. D/s couples tend to progressively escalate the intensity/activities as time passes and their tastes will change along with that. It's also interesting that certain fetish/kink activities tend to become fetishes for men over time but usually are better described as "turn ons" for women.

Probably the most difficult thing I have been faced with is having to shift between being submissive and "normal," and how my Dommes have reacted to that. If you're the sub and the Domme just blew the rent money on clothes and shoes, what are you supposed to do? What kind of conflict does that fall into? I'm just sort of curious as I've been faced with situations like these in the past and they're very far removed from anything kinky or sexual.

Overall, your posts are giving me a lot of useful things to think about but I haven't really formulated a complete philosophy on it yet... which again is why this post is all over the place.

>how the Domme reacts to conflict
Yes, this is an important point. Not all drama is to do with intimacy. Sometimes it's just to do with control. Some dommes like the limits tested. Others don't.

>if you're the sub and the >Dommejust blew the rent money on
>clothes and shoes, what are you
>supposed to do? What kind of >conflict does that fall into?

ROFL. I think you're describing a hard limit!

It's the kind of thing that happens in vanilla dysfunctional relationships all the time.

It is amusing to analyze some of the semi-comical breakdowns from the outset but many D/s relationships end up faltering in a way that is less than traditional.

Poor financial decisions, poor health decisions, poor decisions decisions, etc. have been stumbling blocks in all of my D/s relationships. I guess a testament to relationships that began vanilla and turned D/s several years after marriage is that those issues are generally ironed out beforehand. It can be quite trying to have to get out of sub mode so you can scold a Domme for making a bad decision. I've taken my fair share of beatings for doing that and I guess they were pretty symbolic of why/how things ended.

I've been with Women that were micro-managing and controlling in their dominance and this made things especially difficult.

I have never submitted to the extent where I lost financial freedom since some of those earlier experiences.

One thing I will say are that a couple of my D/s relationships didn't have a separate shadow and vanilla aspects to the relationship. They were basically D/s all the time. I didn't mind that and actually, quite enjoyed it when things were working well.

Oneof the nice things about shadow relationships is that though the action may be provisional, the relationship isn't; real life can't intrude.