Make no mistake. Real slavery sucks. In it's modern form, it's downright evil. In the ancient world - well - it was a fact of life, with all sorts of nuances. Remember, though, that for every loyal human chattel of a stern but fair familias, there were dozens of mine and farm slaves, brutalised into an early grave, or freed in their dotage to starve as beggars. So let's not get nostalgic.

Even so, there's something attractive about the fantasy of being a real slave.

By "real slave", I mean something a bit different from the typical "bottom" who craves the drama and the ritual of the extracting and testing of their submission. In submissive fantasies, the slave is the centre of attention. In, for example, The Story of O, there's a lot of song and dance about how 'O' is becoming nothing, yadyadyada, but the entire story world revolves around her to the point of turning her into a Mary Sue.

I also mean something different from modern 24/7 consensual slavery. This sort of existence is close to the sort of slavery I'm talking about, but it's both consensual and remarkable; slaves can walk away, and they aren't part of the backdrop since they pretty much define a subculture. Fantasising about consensual slavery would be like enjoying films about paint war games.

No, the fantasy I'm talking about is something close to the personal version of the Roman original; real slavery in a society where slaves are ubiquitous and unremarked on, invisible almost.

So what are the attractions? 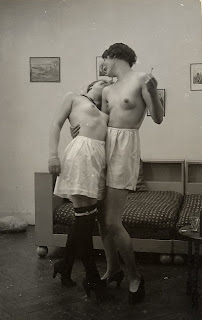 Slavery then becomes a sort of shark cage, taking the fantasist to places where he otherwise could not go, for example and most obviously, a Sapphic bedchamber.

Then there's the whips and chains. In any sort of slavery fantasy, there's bound to be lashings of B&D. S&M fantasies hardly need an explanation... actually, they are hard to explain, but they are a fact of many people's sexualities.

The thing is, you can get all of this from less extreme fantasies.

Wouldn't it be nice just to give up? If things were simpler and all we had to do was obey orders? If we always knew our place? If nuances no longer hemmed us in?

It's an attractive fantasy to escape into... for a while.

I think most people with sadomasochistic desires inevitably has times when their mind wanders to the edge. What would it be like to go all the way.

I think "fantasy inflation" must be a very common experience. Part of our kick is to take the fantasies beyond the edge of the comfort zone. It's no different from any other kind of fantasy. Nobody makes films about paintball or laser tag.

However, slave fantasies can become more varied as soon as your alter egeo ceases to be the centre of attention.

hi, found your blog on the absolute writer forum and thought I'd give you a wave before going back to reading it backwards.

Thanks scarlettleopard! I seem to get a good few hits, but not enough comments to tell whether anybody's stopping to read this.

I'll take a look at your blog shortly...