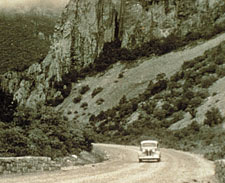 There’s a bang, like a rifle shot. The old fashioned automobile swerves, throwing me across the leather upholstered rear seat. Cursing, my “owner” coaxes the vehicle into the side of the highway. The car sways and she gets out to take a look.

Still shaken, I right myself and peer out of the back window. I read somewhere that the best time for a prisoner to escape is as soon as possible after capture. What with the production line and the slave auction, I haven’t had a chance… until now.

Beyond the dirty glass, a prairie stretches out to the sky. In the distance, stick figures cowgirls in broad Stetsons herd longhorns. There’s nowhere to run to, and the penalties for running away are terrible.

My pulse throbs against the steel band around my throat, and I feel for all the world like a dog in the back of its mistress’s car. However, in this hellish alternate Earth, dogs - as they made a point to tell us at the Slave Factory - have more rights than men.

My hand drops to my groin. The chastity cage is hard behind the fabric of my knee breeches. The skin still itches where the surgical steel wires plunge through living flesh to anchor in the bone beneath. Better to risk a million beatings, than to spend a life as a semi-neutered slave. 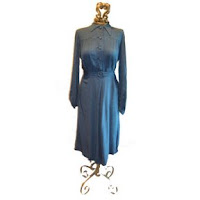 I look the person who bought me at auction. She’s an ordinary girl about my age. In the long-sleeved 1930s-style dress, she looks more sweet than square, innocuous even. If it weren’t for the brain conditioning, I could overpower her.

She opens the door. “Get out,” she snaps. “Kneel over there, out of the way.”

I scuttle out and fall to my knees on the dry earth by the car’s front bumper. I can’t stop panting. Am I really scared of this girl?

But she has her back to me, legs pressed together, seems drawing neat lines up her nylon-wrapped calves. All her attention is on the deflated rear tire. With another curse, she unstraps the spare tire from car’s rear, then rummages in the boot.

I look around. A hundred paces from the road, there’s a stand of trees which I couldn’t see from the back window. I could lose her in there, then leg it back and take the car.

I check to see what she’s doing and gasp. For the first time, my penis swells against its cage and strains hopelessly to erect itself. 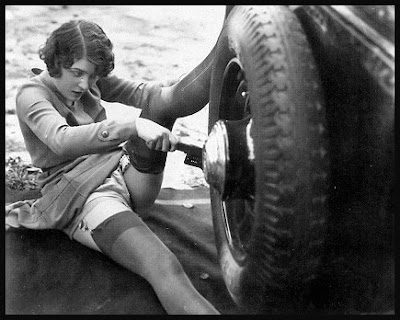 She’s sitting on the ground, wrestling with the tire iron. Her hem has ridden up to her hips, and her thighs are wide open. She has one slender leg braced against the rear bodywork, the nylon already laddered. The nylon ends half way up her thigh. Then there’s a glorious expanse of olive-skinned flesh, obscured only by a think white garter strap which vanishes into her loose silk panties.

She glances at me.

I flinch and blush, but she just returns to her task. If I’m less than a dog, why should she care that I can see her stockingtops?

Free of fear now, I just stare. My penis throbs against the wires, beating like a second heart.

The trees seem further than I thought. There’ll be other chances to escape, I’m sure.

She looks up and fixes me with a her dark eyes. "Why, you're thinking of doing a runner - aren't ya' boy?"