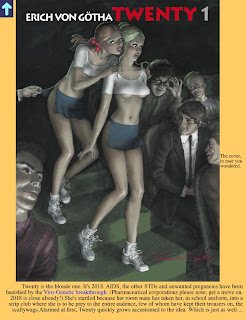 A pity his scripts suck, then.

Well, not all of them. "The Insatiable Curiosity of Sophie" was excellent. "Twenty", judging from a quick glance through his other work, however, is more typical of his output.

Usually, the artist is simply not a writer, and it shows. They're faking it, using misapplied techniques borrowed from Hollywood.

So, we get poor handling of exposition, clunky or overabundant dialogue, plots presented as mysteries, and over-complex world-building. The real amateurs – not Von Gotha, I hasten to add - also waste pages and pages on set-up.

#2. No running threat, so no real story

"Sophie" worked because the protagonist had something to lose – innocence and respectability – as she descended into the secret sex club. "Twenty", on the other hand, follows a similar loss of innocence, but in a society where to be a debauched swinger is not just respectable - it's actually socially mandatory.

OK, I admit it, "Twenty" did eventually have a real threat, but it was of the thriller kind; Dick Dastardly is after her inheritance. Zzzzzz.

It simply isn't enough to present a thriller or love story peopled by sexy people who stop off to have sex between plot moments. "Look at the sexy super-heroine!" "Hey, the detective is shagging the witness."

It's tempting to say; "Find a real writer like me."

However, artists – especially those working in their spare time - like to illustrate their own vision. Fair enough - I wouldn’t write a novel to somebody else's outline.

So, in the end, it's up to the artist. There are books on general story telling – Robert McKee's "Story" is the classic used by movie script writers. There are also good books explaining how comics work, Scott McCloud's "Understanding Comics" is the obvious one.

EDIT: John in comments pointed out that the link is broken. Gotha's site has been down for some time, so I've linked to a Google image search instead.

Hi Giles,
not that I'm a 'real writer' but he same thoughts are on my mind when I see pro-photografers series of work. Every shot maybe great but as a story those series are often hopeless.

Paradox´Pirate
photografer, writer and slave to my wife

Thanks Paradox Pirate! It's a common malady.

(BTW Have updated link to my novel, which is now here: http://www.lulu.com/content/paperback-book/the-chastity-belt/7942465)

The artist link is broken.

The ability to draw doesn't give someone the ability to narrate and plot. Best for an artist to know his limitations so his work can find a wider and more enduring audience.

Hi John
Nice if they did... I'd love to write a script for somebody.

In practice, these things are so personal that I doubt it could ever happen.
G