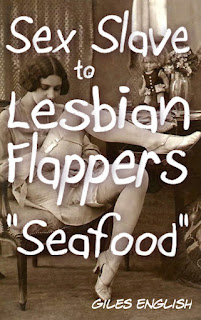 A week later, Lena strolled along the cliff top path. She had exchanged her cloche hat for a floppy knitted beret. The wind made her scarf dance and her heavy tweed dress cling to her legs. However, my owner looked warm enough in her “Arran” sweater, its red and orange zigzags cheerfully defying the bleak landscape of scrubby grass and rocks.

She was also magnificently alone—
—except for me, her slave, plodding along half a minute behind laded with a thermos flask and folding stool. But then, I didn’t count.
Lena had kept to herself for a week, typing, walking and sleeping. I’d run errands down the cliff steps to the village, made her endless coffees, but I’d only touched her to give her long massages. If she had masturbated again, I had not seen it. 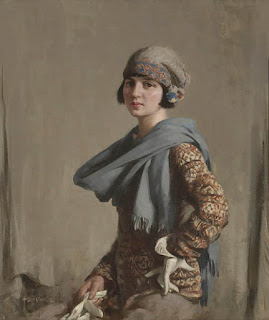 The memory of that frantic self pleasuring made my lost cock heave inside its surgical steel cage. Her daily massages were a delicious torment. Despite the cold wind, I could almost feel the heat of the bedroom, see the firelight flicker on her oiled flesh as I ran my thumbs up and down her spine, the lust breaking over me in waves.
I frowned. Just a general lust, I told myself. I just wanted more of the free porn show. I most certainly didn’t have any desire for Lena in particular.
Damn! She’d stopped and I’d ended up just a little too close.
I halted and tensed, expecting her to use that clicker of hers to rack up another demerit. Instead, Lena produced her binoculars and swept them out to sea - not out to sea, she was pointing them down at the beach.
I sidled a little closer to the edge so I could see what she was looking at.
Far below, in a sheltered cove, a barefoot girl in a duffle coat left footprints in the sand while the wind made a swirling cloud out of her ash blond hair. It was Daphne the artist! My groin tightened a notch.
Daphne stopped just short of the high-tide mark. She put down her sandals, unslung a satchel and draped a towel over a rock. The heavy duffle coat came off and the wind plastered her flowery summer dress to her statuesque figure. She caught the fluttering hem and whipped it off over her head to stand naked on the cold beach, her back to us.
My cock came to a prickling hardness and tried to tear free off its permanent cage. Pale skin made marble-white by the cold, statuesque curves competing with the waves… Daphne looked like a goddess.
The wind snatched the dress out of her hand. She turned inland and raced after it, hair billowing ahead of her, teeth flashing with merriment. Her full breasts bounced as they ran, dark areolae bobbing in time to her long stride. My gaze fixed on a divine blond arrowhead of curls between her honeyed thighs and my chastity cage seemed to fold in on itself.
I glanced guiltily at Lena, but my mistress was lost in the view, moving only to keep the binoculars focused on the naked blond girl.
Daphne caught the dress. She carried it back to her rock then bent to trap it with stones - was that shadow between her thighs the darker skin of her vulva? My vision blurred and a tremor ran through me.
The blond girl stepped over the band of rotting seaweed marking high tide. She sprinted down the beach, took three long bounds into the waves, then, like a dolphin, made shallow dive into the frothing water.
My owner and I both watched rapt as the girl swam back and forwards across the bay.
I shifted from foot to foot trying to stay warm, my cock just a numb hardness. More sensibly dressed than I, Lena just stood there enjoying the close ups granted by her binoculars. From time to time, her legs tensed and she twitched her hips.
I looked back down at the beach.
Daphne emerged from the sea like a mermaid, her large breasts firm and globular, shiny with saltwater. The water fell away from her flat tummy, then her pussy - the white-blond curls plastered against her pubis. She strode up the beach, white-skinned and unearthly, as immune to the cold as a goddess. She grabbed the towel in both hands and dried herself with vigor, making her breasts wobble.
The tip of my penis prickled and it was if the each wave that struck the beach ran on up the cliffs to make me sway back and forth. I just wanted to run home and masturbate, but there was no home, and no possibility of masturbating, ever.
Daphne pulled on her dress, then the duffle coat, then trapped her hair with a woolly hat. The show was over.
Bootsteps crunched on the path. Lena strode past me. I raced after her, back along the cliff path to her cottage.
I found her in the porch. Still wearing her Arran sweater, she was sprawled in an old wooden chair.
I hung up my bulky coat then knelt to unlace her muddy boots.
“Forget the boots,” she said, spreading her legs. The hem of the tweed dress rode up to reveal cosy woolen stockings hugging sleek calves. “Lick me.”
A steel fist clenched my cock.

great story! I can't wait for the boots to come off!!!

Thanks! I am glad SOMEBODY likes the Whips and Stockingstops setting.

Shipping this weekend, I think :)

Jack - if you want to read the whole thing and can do so before Friday please supply me with an email address.

Oh my god! I can't wait to read the complete story! Great images!