The Cruelty Paradox : Masochism is all in the mind - the body still suffers 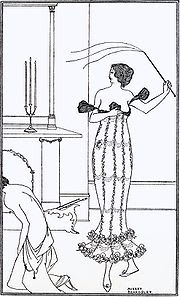 Masochist: Whip me! Whip me!

And it's true. Just look online. For real punishment intended to modify behavior, some doms avoid using whips and chains.

It's another one of the Paradoxes of Consent. I call this one the Cruelty Paradox; if the "slave" is masochistic, then isn't cruelty meaningless?

The paradox doesn't really apply to regular D/S games, or even lifestyles. Judging by the fetish forums, whipping and other corporal punishments are often administered in a spirit of interactivity; pushing and playing with the limits like a dark inversion of making love. Genuine but moral sadists often get their kicks on a one-for you ("Ahhhh..."), and one for me ("Argh!"), or by playing make believe; he really does hate being whipped, (that's why he's ejaculating....).

The paradox does matter when role playing eroticized historical-style slavery – which I suppose is what this series of posts is really about. The more authentic the slavery, the greater the kick for the slave. The cruelty turns us on, but if it's done for our benefit, then rather than serving our owner, we're importuning our partner.

Take a trip with Trans Temporal Tours to my alternate modern Bath, Aqua Sulus, and find out.

Collared and locked into your chastity belt, you'll serve one of the visiting Roman women (if you recall, in this timeline, the Roman Empire never fell), with no way out until the portal opens fourteen days later. 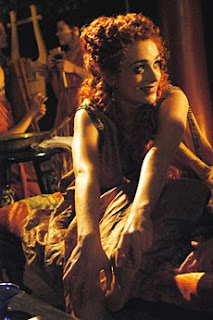 Cornelia, your beautiful temporary owner, is just here for a good time. You'll attend her at the famous baths, carry her shopping, dress and undress her, and satisfy her voracious erotic needs. Life with her is like a 24/7 teasing and denial session, but she doesn't care that your chastity belt is always crammed to bursting point. If your distraction makes you incompetent, she'll whip you until you scream into your gag – you're gagged because she'll be chatting on her cell phone at the time – but she's not interested in the semen pooling on the tiles at your feet. In fact, she's not really interested in the pain she inflicts. She just wants you Not To Spill the Expensive Bubbly Again, Ever.

Since your masochism subverts these punishments, isn't your visit to Cornelia's timeline essentially exploitative?

Not really, because Cornelia is still correct in her assumption that you are afraid of punishment.

We masochistic slaves have – to use technical terms – really very fucked up responses to pain.

Very few of us enjoy the pain itself (though I'm assured such people exist). Instead, most of us enjoy the prospect and aftermath: psychologically, because it means we're enslaved and powerless; and usually physically, thanks to the endorphin rush and the quickened heart rate – fear is an aphrodisiac.

Even granted this before-and-after pleasure, most of us are permanently ambivalent about the pain itself. It's no different from taking a rollercoaster ride, going bungee jumping, leaping into an ice cold ocean, or going to a horror movie. Our self is divided and we fear the experience we crave.

So, as long as Cornelia strikes hard enough to hurt, rather than just stimulate, then you – the slave – will on some instinctive level leap to obey her every order, and do your best to avoid another beating. However full your chastity belt, you're still her slave. 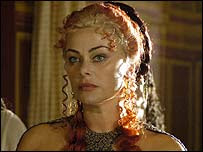 The same goes for the accidental teasing and denial. The chastity belt rather suggests that she does expect you to be turned on, but doesn't want to know about it.

By extension, the same applies to deliberate cruelty.

Suppose you fall into the hands of the sadistic Lucia, or the teasing Cleopatra? If the power differential and the chastity belt are necessary before you can endure the experience, then, logically, the same ambivalence applies.

You want it and you don't want it. The inside of your head odd and divided against itself, but the suffering is authentic, and so therefore is the cruelty.

Email ThisBlogThis!Share to TwitterShare to FacebookShare to Pinterest
Labels: D/S, Fantasy Slavery, The Paradoxes of Consent

Brilliant post! I can't believe more people haven't written about the Paradox of Masochism. But you've summed it up brilliantly. :)

Thanks! I suppose people expect to be able to sum their parts to a single whole. Doesn't work that way :)