A long time ago, in pre-Internet days, a bewildered girlfriend once fumed, "You want me to be in charge, but then you tell me what to do!"

Predictably, rather than trigger a stiff beating, her irritation terminated the scene. I had – as I now know – been caught "topping from the bottom".

My excuse is that I had fallen through a vortex created by the Power Paradox: How can slavery* be conditional?

*I'm using slavery here to mean the power relationship itself, rather than what's in people's heads.

Be honest, most modern 'slaves' know what we're after. There are conditions to be met before we'll play.

However, when you get into detail, our specific fantasies are still personal to us; a kinky offshoot of unique lives. I'm drawn to submerge myself in slavery, others to the struggle between slave and owner. I like the experience of chastity, others the ritual and torment of the keyholding relationship. We share the same props, but the drama, or not, depends on the players.

So, no, I'm not a proper slave, if that means submitting to any command from an arbitrarily chosen mistress – and nor, dear reader, are you.

Why should we be? We do this for fun.

Even so, this doesn't automatically make our slavery fake. In fact, we quite like the idea of real slavery...

Let me introduce myself! I'm Giles English of Transtemporal Tours.

You're here because we can infiltrate you into any conceivable alternate Earth, and extract you after a set time. 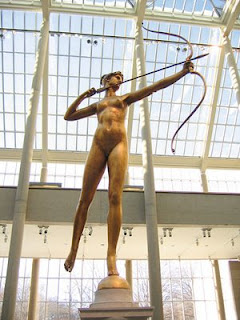 For example, not far from here is a world where the Roman Empire never fell. Women's Lib happened on schedule, but I'm afraid slavery persists. Bath – the British city of Aqua Sulis actually - is now a female-only spa dedicated to Diana the Virgin Goddess. There she is in the center-piece of the local forum (left).

Aqua Sulis is a popular resort for women of all ages and walks of life. The done thing is to hire a male slave for the duration of the visit.

Ah, did I say female only?

Well, the men all have to wear chastity devices.

Sometimes the slave serves as guide and porter. Other times as lover or whipping boy, or some combination of the two.

I can tell you're excited by the thought of experiencing this unique culture from the inside. We keep notes on all regulars. Let me show you the online catalog… yes these are all real Roman Citizens booked in for two week holidays.

Claudia here… very pretty. Likes to tease you with her fine body, but then caress you with the whip.

The traditional dress looks odd mixed with the modern clothing, but then the Romans always did mix and match to suit...

Olivia… she's a romantic. She always falls in love with her slaves, but never asks for the same one back the next year. Multiply orgasmic, as well. You'd have lots of sex with her… oh, by sex I mean using a range of prosthetics. The chastity device doesn't come off.

But perhaps you don't want the intensity of one-to-one?

College parties are less predictable since the make up changes from year to year, but each Sorority has its own tradition.

These girls belong to the Sisterhood of the Huntress. The other lot… preppy, you might call them. They're the Cult of Minerva, here to study. They'd be more interested in each other than in you… would barely notice you, even when they made out. Unless you spill anything. Very fastidious and they like to do this thing with hot wax…

Or how about rough trade? There's always a busload of factory girls trundling in from Wales…

Take your pick sir and we'll arrange training and transport.

Of course, once you're there, your stuck until we extract you fourteen (14) days later. You'll be a real slave. If you run, real police will fetch you back. If you disobey, then your legal owners – usually Catriona's Vacation Slaves – will flog you.

You've made your selection already? Fantastic. Just let me print the consent forms…

Gotcha! You really did pick one. (Or come up with your own – do share.)

Imagine if you went ahead and bought a ticket. You'd control the exact nature of your slavery and its duration. So your slavery would be 100% conditional. Even so, it would also be 100% real.

In a sense, you're both taking a trip to a foreign country where the rules are different.

Of course, unless you've agreed the destination together, then you're still topping from the bottom - but that's a subject worthy of another post.

Email ThisBlogThis!Share to TwitterShare to FacebookShare to Pinterest
Labels: D/S, Fantasy Slavery, The Paradoxes of Consent, Topping from the bottom