8 ways to get a man into a (fictional) chastity belt, and keep him there 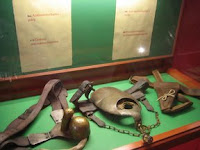 I want to get my hero into a chastity belt, keep him locked up while threatened by being trapped, then actually trap him.

Funnily enough, most mechanisms I can think of can provide all four elements. They divide neatly into three categories:

2. Capture
Capture makes a great inciting incident and premise. Unfortunately, it provides a lousy danger and resolution. Plausible private captivity is always provisional, and the way you deal with it is by planning to escape.. a tad mundane, you’ll agree. However, you can field a Mental threat and resolution such as Perversion, which can cause the hero to miss opportunities to escape. I did this for my Psycho Goth Girl series over at www.IndecisiveCaptions.com.

3. Technology
Technology is great for the first three elements, if you can make it believable without being boring. Massive overkill works – in my chastity novel I threw in an indestructible “quantumite” chastity belt, had the hero volunteer to test it, and got on with the story. For a resolution… on its own, it’s not very satisfying, but you can use it to make irrevocable a Mental resolution. Perversion, for example, could make our hero throw away his key.

PRACTICAL
4. Blackmail
Blackmail gets the hero into his belt. It also keeps him there… for a while. And there’s the snag - there are mundane and ugly ways of dealing with blackmailers, and no obvious resolution except for light and fluffy ones. Really blackmail is only good for an inciting incident and a premise, and only then if the hero is blackmailed with his own sexuality – otherwise you’re spending screen time establishing a mundane threat. Like technology, use massive overkill and get on with the story.

MENTAL
6. Sex
I love the irony of this one. Perhaps the male chastity belt unlocks the sexuality of an otherwise frigid woman. The one sided sex gets better and better, until the hero worries about being hooked… Great inciting incident and premise, plausible danger, but weaker resolution unless you can make it irrevocable.

7. Perversion
Perversion certainly gets plenty of real men into chastity belts, but I doubt it keeps many locked in. The paradox of chastity belts is that they put the wearer in a continuous state of conflict – sensuality vs need for release – with a built in safety fuse when the latter becomes too strong. However, it’s easy to fantasise about going so far that it’s impossible to go back. So, Perversion can carry all four elements. However, like Sex, it helps if you use some other mechanism to make it irrevocable.

Where Psychology is utterly brilliant is in building a resolution. It’s entirely plausible that somebody could be mentally incapable of removing their chastity belt, or unable to leave somebody who demanded they stay in it 24/7.

To get a permanent resolution, the Physical mechanisms all require mental gymnastics. Can’t the threat of violence be overcome through flight? Is it really possible for her to keep him captive forever? Is any device truly inescapable? Practical ones are flawed because, surely, time, flight, or the law will negate blackmail threats, and there must come a point where money is less interesting than orgasm.

The Mental mechanisms make the most satisfying resolutions because they resonate with the chastity belt fantasy – they’re what it’s about. However, we’re only really driven by Sex and Perversion when we’re turned on. Give the hero an ejaculation, and he should be thinking about how to get a proper orgasm, if not today, someday.

Better yet, it has the possibility of making it into real literature...