As promised in an earlier post, here's why I think most healthy relationships have a potential kinky dynamic, which I fall a Shadow Relationship:

a spot where your darkside overlaps hers. You're both acting spontaneously without a script, enjoying your roles for their own sake. Anything that happens is authentic, because it's what you'd both do if your roles were real. The relationship is a shadow one, but still an actual relationship.

If Robin Skynner, author of Families and How to Survive Them, is right, then we tend to share issues with our partners. He calls this the Shop Window Theory (no googleable reference - you'll have to go and buy the book...)

In short, when courting, we tend to try to escape our issues by putting the opposite in our "shop window". For example, if I have a problem with anger, then my shop window oozes with the calm I intuit will attract a living saint.

The snag of course is that she'll also have a shop window. If it's oozing with tranquility, then perhaps she too has a problem with anger; it's like two con-artists marrying each other for money!

So, the relationship can take two broad paths: the functional, in which we both help each other deal with our anger issues; and the dysfunctional - the fucked up - where we repress each other, or boil over into mental or physical abuse, or both. 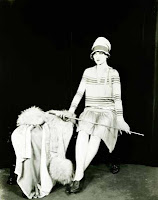 Note, however, that I'm talking about roles and relationships, here.

Things you fantasise about because they scare you, probably don't represent a viable shadow relationship, because they go against your basic nature. You wouldn't expect your partner to share your love of extreme sports either (though she might).

There's also a lot of mundane crap that can get in the way. Possibly the particular form of your fantasy puts her off, or your coping strategy. However, I think it's easy to forget the other barriers to play, including self consciousness, cultural imperatives against eroticism, emotional fragility, and plain old fatigue.

And you can screw it up yourself in so many ways....