And here's the concluding part of Episode 4. I think there's another to come. As always, it all depends on reader reaction...

He shuddered. "No. That's not fair!"
"But you are wanting to come?" cooed Brigit, rubbing insistently.
"Yes! No.. Ah...!"
The sharp sensation set Tom straining in his bonds, pulling back his hips. But Brigit's fingers followed. Tom's penis throbbed crazily, trying to burst free of the flesh-welded cup
"It's a bit like an oversized love button," she mused.
The semen forced its way through his penis like molten lava. Tom whimpered and clenched his buttocks, doing everything to draw back on the torrent.
Brigit yelped and leapt to her feet.
Tom's penis rippled. He thrust his hips but felt nothing as a months' worth of semen drained from the blank cup.
The girls laughed and Tom blushed. Shorn of the fuzz of sexual frustration, he felt achy, sticky, foolish—
Mary gave the whip an experimental flourish. The tails fanned out and swished the air. Not a whip then, a scourge.
--and scared. "Please no! You can’t do this!"
Mary grinned like a demented pixie. "But I can, and I will!" As the other two girls arranged themselves on the nearest bed to watch, the petite blonde paced around to stand to his left. He glimpsed the scourge rise, then pain-drops spattered his back.
Tom yelped and arched back against his bonds.
Mary giggled and struck him again, this time on the buttocks.
The impact rocked through into his chastity cup and his flaccid penis twitched.
"How am I doing?" she asked.
Tom just whimpered.
Brigit grinned. "I've had an idea." She rolled to her feet, put her back to Tom and lifted the hem of her silvery dress to unveil moon-white buttocks dusted with freckles.
Deidre's jaw dropped. "Brigit Ursula O'Hara, what do you think you are doing?"
Brigit shifted her silver-sandled feet apart and bent over to rest her hands on the bed.
Tom's eyes widened. His cock stirred inside its prison.
The red head reached back one hand to guide his... no, the fake... cock into her pussy, and pushed her cool buttocks against his thighs. "I promised him sex."
"Are you quite finished?" asked Mary from his left.
"Yes," said Brigit, her Celtic lilt turning into a luxurious drawl. She glanced over her freckled shoulder. "Whip him until he bleeds."
The scourged swished and clawed the back of Tom's left thigh. He screamed and writhed against the bonds that pinned him in a taut X. The dildo slurped and the redhead moaned.
Now the scourge bit his shoulders, his waist, his buttocks, dotting around randomly so there was no way to brace for the pain. Each assault forced a scream from his throat and made his hips jerk. The redhead kept her buttocks jammed firmly against his thighs, so his agonised movements made the dildo so churn and squelched inside her red-thatched vagina.
The plump girl on the bed reached inside her sheet. Her arm worked in time to the pain. Her face purpled. She drew in her legs, shedding her covering entirely so that he could see her chubby fingers in the midst of her thick black curls, churning away at her glistening lips.
And the scourge scored his back, making wet sounds as it landed.
Tom gave up screaming and now Brigit's and Deidre's mingled moans buffeted his ears. The plump girl curled forward and seemed to meet the tall redhead's gaze, then she gave a long groan, and that triggered an answering cry of orgasm.
The pain ceased. "Thank God!" said Mary. "My arm hurts."
The redhead twitched forward off Tom's dildo, straightened herself and brushed down her skirt silvery skirt. "You can go now." She clapped her hands. "Release."
The bonds simply gave.
Tom dropped to his knees and then toppled to sprawl on the floor. The welts criss-crossing his back and buttocks became a throbbing web of pain.
"No, he can't be going," said Mary, behind him. Her bare feet pattered around him and appeared before his face. Her toes were neatly pedicured, but with no sign of nail polish. "Kiss my feet," she said.
Tom raised his face. "Go to Hell!" His gaze ran up her slender thighs and beyond the hem of her T-shirt. A sodden furrow divided her blonde frizz, leaving her red pubic lips.
He kissed the top of Mary's tiny feet.
The salt and dust collected on his tongue and it was as if the web of pain collapsed into his groin.
With a groan, he forced his tongue between her toes. The sweaty tang made his chastity cup clench like a robotic fist. He whimpered and licked up towards her anklebone. "Let me fuck you."
Mary laughed. The scourge caught him in the cheek.
His face blazed and he sprawled onto his marred back to lie their pinned by fatigue and pain.
"I have a better idea..." Her footsteps receded. The fabricator pinged and the girls giggled.
Tom raised his head.
The petite blonde stood before him, naked now; pert breasts glistening in the light, nipples standing out like finger tips, and a black penis sprouting from her groin as if it belonged. "I think I'll be the one doing the fucking."
Tom yelped. His anus clenched, sending blood into his captive groin. "No!"
Mary's eyes narrowed. "But you want it, don’t you?"
The tall redhead appeared beside her, equally naked except for her strappy sandals, long legs stretching up to where a dildo protruded from her red bush. "I'm sure he does. Why else would he have come home with me?" said Brigit sweetly. 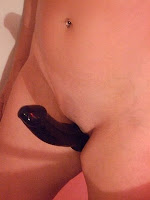 Have you ever thought about writing an epilogue to the story of Tom and Brigit? Part Four ends at a good point, but it might be interesting to jump ahead a bit for a follow-up/aftermath scene.

Thanks. Yes. Perhaps a longer story.

Long stories are always nice. But I was thinking more along the lines of Tom running into one or more of the girls several days (or weeks) later - which could be interestingly awkward. Or it could be a "solo" piece" - Brigit finally talking the girls into going clubbing with her, or Tom finding a real girlfriend. Hmm . . . even just a friendly conversation between Tom and Claudia, (about how his night with Brigit went) could be interesting . . .

But long stories are good, too - don't let me discourage you