Well, I suppose we all do. That's the point. The problem is that real ones aren't -- the Custom Chastity device I'm wearing right now is pretty wonderful, but if I wanted, I could pull out the back and get myself off.

If that was a real problem for me, I could have a piercing.

Piercings, however, are no good for my kind of chastity fiction. It's not that they are beyond my comfort zone, it's that they take too long to heal before you can use them to secure a chastity device. And if the character is pre-pierced, it follows that they are already kinky.

My kind of fiction needs a device that you can just put on and be stuck in.

Usually I cheat.  For my first novel, I simply used a full belt made of Quantumite, basically a what TV tropes calls Unobtanium. For two of my other series, it's a surgically implanted cage or cup.

I tried to be a little more realistic with Enslaved by Posh Totty: I'd seen a documentary about new nano materials, and they've developed a super sticky surface based on geckos. I figure a strip of that would anchor a dick in place.

What I missed was a simpler much more practical solution!

Somebody has worked out how to anchor a urethral plug against the firmer tissue of the head.

There's a whole little sub culture built around this sort of tethering, and not just for chastity.

It has two problems: it's a fiddle to get on - you have to mess around with dental floss; and it's a not clear how well it would work for long term use - the membranes involved like to stay wet.

But, what if the plug was 3D printed in a mesh form using the same medical technology you see in stents? medic?

It could be designed to compress in one direction and not the other, so making it impossible to remove.

Or it could be made of a memory plastic that changes shape when it reaches body temperature, only to snap back much later so you can remove it.

The possibilities are endless. Now I just need a story... 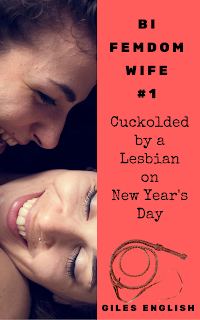 Interesting idea, Giles. This is something I hadn't really thought about.

Btw, I started writing my first bit of fiction and the main character has spent 95% of it in chastity. I still blame you Giles :)

It is. The funniest thing I realized was that the Domme ended up with the name Cassandra as well. This was unplanned as I wrote the first 2 chapters with her nameless but wanted a name that would have a familiar abbreviation as well as a longer formal version and I chose that as random. After about 20 chapters I realized I had read that name before in a story :)

Are these devices worn or inserted?

The stents (the mesh tubes)? They are inserted into arteries. I included them just to show what was possible.

Another option might be the insurance/bail/bounty model. Basically, a socially imposed chastity option. Suppose Brand X chastity advertises itself as inescapable, and offers a substantial cash reward/bounty for anyone who can get out. Right off the bat, that poses a substantial reason for girls to tease the heck out of chastised males, get them naked (to inspect the device) and to immediately report them if the guy finds a way to get out.

Now pair that with a stiff penalty for any guy found out of his Brand X chastity device . . . Either he had to put up a substantial cash bond when he got locked up, or he has to pay some sort of big fine, or ...

So right there, you've got a "social lock" keeping him in chastity.

Then provide a reason for the guys to wear Brand X. Say a "progressive" university decides to mandate that all male students carry prohibitively expensive "sexual misconduct" insurance. But the rates go down, the more secure the chastity device is . . . And the university can punish them, if they're caught trying to escape, further reinforcing the social lock . . .

Actually, if we're looking for *plausible*, then a rented full belt is the answer. Essentially, the user is renting the belt, subject to yearly inspections. If the belt is damaged, then there's a hefty deposit at stake.