My favorite flappers in various states of undress #2: Car Girl 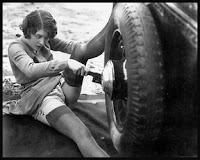 Some 1920s models just stand out as people. Car Girl is one of these.

Here she is trying to replace her car wheel and she looks as if that's exactly what she's trying to do.

Plus she's flashing her stockings and panties.

That strength of personality makes the  picture hotter, more intimate. It feels like a glimpse of something real.

The whole 1920s era feels like one big "First Time" stories, with fresh faced young things going out into the world and doing it, it being everything from embracing independence through to actual sex.

Most of all, though,  I get a kick out of knowing that every single woman in a 1920s photograph is wearing stockings!

Me being me, I also imagine myself into this picture as a chaste slave. I want to kneel at her feet and drag down those loose panties and get my head between those pale thighs...

So Car Girl is very sexy indeed, but also fascinating because of the way her personality shines through the old photos.

I've kept and eye out for pictures of her. For a start I wanted to know what her face looked like.

Imagine my joy when this turned up (left). And, yes, I did google the number plate but couldn't even find a place to look it up!

Having seen her face, and her legs, I wanted to see the rest of her. Joy of joys, there is a companion piece to the hood photograph (right).

What I like about it is that she's kind of glowing - she looks as if she really doesn't care, and enjoys that fact. She also looks intelligent. This is not an airhead.

She also has nice breasts!

Faces in old photos are hard to match up. 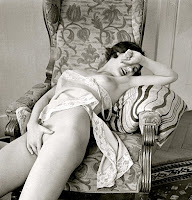 However the combination of face and breasts makes me almost certain this is her (left), naked at the beach and again, not really giving a damn.

In fact, it looks to me as if she's rather enjoying herself.

There's one more picture (right( I'd really like to be Car Girl, but it's hard to tell and probably wishful thinking on my side.

Medium breasts, strong eyebrows, rounded nose... it could be her.

I bet she was behind the wheel driving as well.