The problem is, how do you get all the other stuff? The props, the clothes, the words, the punishments...?

Some of these aren't trivial. Perhaps they're what the fantasy is really about for you, or perhaps they're part of your way of coping with the inherent contradictions of asking another person to treat you evilly. You can't just discard them. However, anything that smacks of scripts or shopping lists bumps one or both of you out of role. 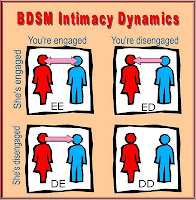 It's harder if she's disengaged (DE, DD). She's not supposed to care about what you're thinking or feeling, so why, e.g., should she dress in a certain way, or punish you more than is "necessary"?

Since it's the hardest, I'm going to take the Disengaged-Disengaged dynamic as an example.

Think about the components of the W&ST fantasy that go beyond the power relationship and "DD" intimacy dynamic: 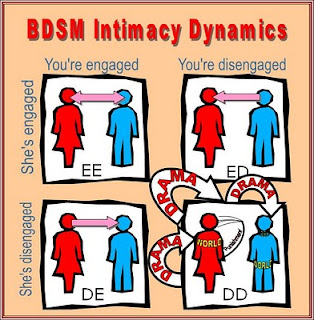 World: Clothes, attitude and the other trappings

If she's not wearing stockings, it's not Whips and Stockingtops! Other retro gear helps, as long as it's comfortable; silky slips and glamorous nightwear. A male chastity device is also mandatory. Any music should be classical or pre-war Jazz.

All this stuff is part of the fantasy world, but none of it follows from the power or intimacy dynamics. Your girlfriend might dress to please you, but your owner doesn't dress to please her slave. His penis is irrelevant, so why bother to cage it? (Similarly, your fantasy mistress might be a feast of leather and PVC, all hard to get into and not always comfortable.)

The only way to approach this is from the outside, as a prerequisite for crossing the border into the darkside. It's simply what people wear. The same goes for any etiquette or attitude.

Prioritise. Don't ask for too much at one go. Start with whatever's easiest and simplest for her. There's a good chance she'll find dressing up empowering or escapist – but you have to let her discover that for herself.

Drama: Action generated by testing or affirming the intimacy dynamic

Testing
If you start groaning because you're turned on, she'll beat you and tell you to shut up. This little drama plays out because you've tried to force her to engage with you, dragging the intimacy dynamic up into ED (see illustration). Inadvertently or not, you've "tested" her.

Testing is best done spontaneously, in role. There may be moments when you are bored or turned on or in some other unbearable state and you end up testing the boundaries – especially true if, unlike me, you are contrary or bratty.

There are, however, problems with testing. First and foremost, testing the intimacy dynamic also means testing the power dynamic. She may be sceptical of your ability to follow through with your fantasy, unsure of her power, or teetering on the brink of self consciousness. Or she may envisage her power as total, and find challenges to it irritating to the point where they bump her out of her role and back to lightside reality.

Secondly, when you test the intimacy dynamic, you may take her places that are not on her darkside map. Perhaps she can only treat you as a slave as long as she doesn't engage with you.

So, go carefully with testing. Treat her power over you as real. If you feel the need to consciously create drama, do so with care and sensitivity. Be aware of the difference between darkside anger and lightside irritation...

Affirmation
Sometimes she may violate the dynamic by teasing you until you're drooling and dripping, then setting you back to work. She's "affirmed" her position. (This is different from the teasing and denial you get in EE and ED since she's only interested in luring you out enough to push you back in.)

It's probably best to go along with any affirmation she initiates– try not to ham it up!

If it takes you to uncomfortable places, tell her much much later.

She's the mistress, you're the slave. From time to time, she'll have good reason to punish you physically, or by humiliation or verbal abuse. In theory, this should be simple as long as you've agreed the mechanics, the limits and the safety – of course. However, it's more complicated than it seems.

NB: In a DD dynamic like W&ST, punishment should involve as little effort for her as possible. A demerit system or clicker counter can enable her to postpone punishment until it suits her.

Routine
You spill the wine, she makes you clear it up then beats you.

If this doesn't seem to be working, wait until later and explain that though punishment is a gratifying part of your fantasy, it's something you instinctively fear and avoid; she really can improve your servile performance by punishing you. Get her to treat all mistakes on your part in role, in return you promise never to deliberately seek punishment.

The big snag with this one is that you probably very rarely make mistakes. Increased strictness on her part can only go so far.

Set up
If you're very lucky, she may enjoy setting you up to fail so she can then beat you. Enjoy!

Procedural
Punishments resulting from the rules of your particular darkside world. For example, it may be good slave keeping practice to prevent you getting uppity by beating you immediately after – or before – you've given oral service. In other words, you're trading lickings for beatings.

This is probably the best way to ensure that your sessions include some punishment. Make the rules as consistent with your roles as possible. Avoid straying into scripting. Accept that sometimes, she won't bother....