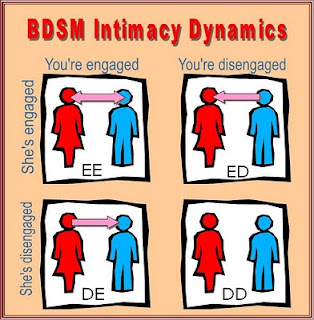 Hi...You seem to be quite well versed on the subject matter covered in your blog so I was hoping that you wouldn't mind if I asked a question that's been on my mind for quite a few years now.

The question has two parts:

Thanks and I'd really be interested in hearing your thoughts on these questions.

I don't have the statistics - not sure anybody has. Ask on fetlife.com.

Full on 24/7 e.g. chastity or WLM/FLR - I think they are vanishingly small. However, about 5% of relationships seem to have similar dynamics, but without the kink. This is never going to be normal, because it's not on the whole what women want.

As for age: I think those of us who are kinky start out with kinky thoughts even before puberty. As we get older, we refine them, and also realise we can live them our.

I also think that very few women indeed want to be in charge in a relationship. Biology simply works against this; wimpy men aren't a turn on for most women. Also, being in charge means taking all the responsibility and going to a lot of effort, and being lonely. Most women - most people - just want a warm, eqal relationship based on desire and companionship.