The Chastity Belt: What happened next....? 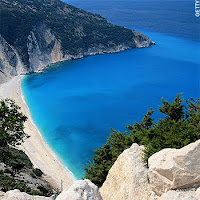 Actually, only I have the answer! It came to me out of the blue. I think I'll call it Chastity on the Beach. Here's a taster of the first draft...

Mark thumbed his way up Cassandra's spine. The suntan lotion made her skin glisten like warm toffee. She let out a long, "Mmmmm..." and his chastity belt tightened.

From behind him came the sound of splashes and giggles; the other two thirds of the Trio making the most of the . It would be nice to turn and watch, but slaves don't choose their own actions, and there was no place with these glorious girls except as a slave.

Mark smiled. The holiday sun had thawed and tanned the alabaster-skinned ice maiden, and streaked her chestnut hair with gold, but she was still the formidable girl he'd fallen in love with. Gingerly, he unfastened the bikini top and rolled his thumbs from the base of her spine to the nape of her neck, again and again, enjoying the sweep of her hourglass figure. Each sweep tightened his chastity belt until it felt as if a mailed fist clutched his lost penis.

Mark knelt back, squirted some lotion into his hand and rubbed his palms to warm it.

A shriek and a splash came from the water.

He gave up and stole a glance into the glare beyond the sunshade.

The other two girls were well out in the private bay, fighting over a lilo. As he watched, Felicity hauled herself aboard and – sodden hair and bare breasts swinging - flopped onto the inflatable. Moira shot out of the water like a polka-dot porpoise and landed astride the larger girl. The water had turned the Scottish readhead's tied-back hair brown-black, but the sun had brought out her freckles, so it seemed that an exotic tattoo covered every inch of her exposed skin.

Mark's cock twitched inside the chastity belt. He bobbed his head, even though she wasn't looking. "Yes, Mistress."

Depression welled up in the pit of his stomach—-

--and his cock throbbed into life, hopelessly straining against his Quantumite prison.

Mark smiled. The good thing about being a masochist is that even the turnoffs are a turn-on... sort of.

Mark shifted his hands to just short of her silver ankle-bracelet and kneaded the powerful calve muscle. Not fashionable legs, he decided. But the curves looked great in stockings. He frowned. Too hot for those at the moment. He worked his way up her near leg as far as the crease where thigh met rump. Then he leant over and repeated the procedure for the far leg. As he reached the top, she raised her hips.

"Remove the briefs and do my buttocks."

Mark slid jet black garment down her long legs. As he reached her ankles, he twisted his head and stole a glance. The tops of her thighs formed an arrow-shaped frame around her ruby labia.

The throbbing in the chastity belt merged into a solid, prickling, pressure. Mark licked his lips and remembered lapping at her crotch, willing his mouth with her juices. But that was before the Trio.

He bent over Cassandra's buttocks, using his weight to pummel and kneed them like rich dough. The hot, animal aroma of her vulva drifted up to tickle his nostrils. His mouth watered and his fingertips tingled with the knowledge that they were inches from the unattainable source - more unattainable now that it had been during his year long pursuit.

The giggles and splashes approached. Feet thudded on the sand.

At least back then, he had had a dark sort of hope. Now he was just a housekeeper, manservant and masseur.

Wet female flesh brushed Mark's flank, setting off a spasm in his penis. The chastity belt beeped, but nobody took any notice of that any more; no amount of self restraint could reduce his life sentence now.

Felicity cocked a leg over Cassandra's torso and shimmied. Water cascaded from her bare breasts and sodden hair.

"Hey!" Cassandra rolled over, breasts a streak of white. "You utter cow!" She started to sit up.

Moira pounced from the side and fastened her mouth on the Cassandra's nipple.

The petite Scots girl slithered astride Cassandra's thigh. The one-piece bathing suit with a retro-fringe of skirt made her look girlish, but the twitches of her pelvis were those of a woman intent on grinding her groin to orgasm.

Felicity giggled and dropped down next to the pair, forcing Mark to scrabble out of the way. She flicked back her hair, them carefully pinched Cassandra's free breast and slid her between her legs. Cassandra's lips went naked these days, the chestnut curls trimmed back for the easy access of tongue and fingertip – female tongue and fingertip.

Cassandra moaned and raised her hips, lifting Moira like a jockey riding a horse over a jump. "Christ, just do it! "

Felicity laughed. "Do what?"

Cassandra raised her head. "Finger me..."

Felicity gave the nipple a tug.

Cassandra moaned and squirmed. The movement triggered a squeal from Moira. The tiny Celtic lass twitched her hips into a frenzy, and whimpered into Cassandra's captive breast--

--and Mark just knelt there on the edge of the shade, waiting for orders, and watching. His chastity belt throbbed like a second heart and he found himself swaying in time to Moira's grindings.

Perhaps the Trio had turned him into some sort of sexless servant. But they were worth it....