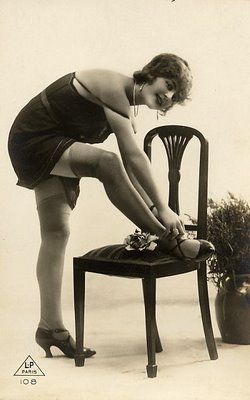 There's something about 1920s and 1930s women - that combination of freshness and sophistication, or is it just the stockings and garter belts?

Thing is, I'm not really interested in the men - stylish though they are. What I really want is hot flapper-on-flapper action. But, that would just leave me with retro-Sapphic tales. Where's the male viewpoint? How about an enslaved male?

So, I've created a Sliders-style alternate Earth, which I call "Whips and Stockingtops World". It's a sort of Art Deco parallel world where all - or most - of the women are lesbians, and the men are all enlabed abductees, fitted with permanent chastity cages.

The idea is to use a slave as narrator, a sort of kinky Dr Watson to the mistress's Holmes. Here's my first attempt. It established the world nicely, but...

I'd like the slave should be a participant voyeur. Not really part of the story, though it might affect him. For example, if somebody breaks his owner's heart, he should have to put up with months of abuse.

He might - perhaps - have an inner journey. The Art Deco setting is close enough to our own world to give him the odd you-are-here moment. This is a chance to explore the boundaries of fantasy and grim reality.

The snag is that this will only work if I can write more or less vanilla love stories! It gets worse: since it's a Sapphic world, I don't even get to do a coming out story.

However, potentially, this could be really hot. Just think of the contrast? Tender flapper lovers making out, while hero nurses his welts and tries not to react?